Prioritization of arbitrary faces associated to self: An EEG study 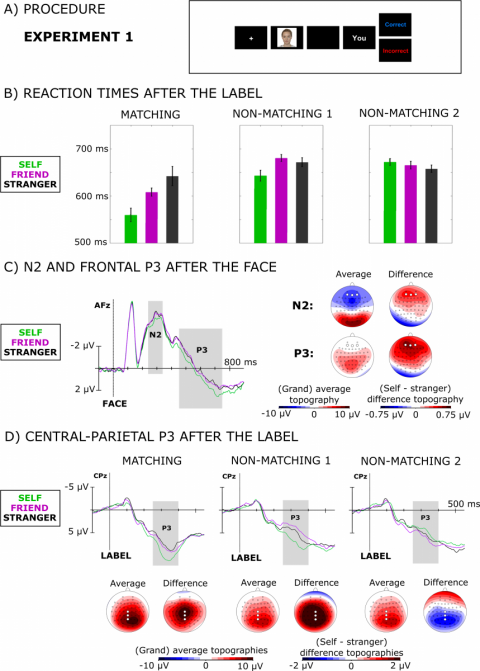 Behavioral and neuroimaging studies have demonstrated that people process preferentially self-related information such as an image of their own face. Furthermore, people rapidly incorporate stimuli into their self-representation even if these stimuli do not have an intrinsic relation to self. In the present study, we investigated the time course of the processes involved in preferential processing of self-related information. In two EEG experiments three unfamiliar faces were identified with verbal labels as either the participant, a friend, or a stranger. Afterwards, participants judged whether two stimuli presented in succession (ISI = 1500ms) matched. In experiment 1, faces were followed by verbal labels and in experiment 2, labels were followed by faces. Both experiments showed the same pattern of behavioral and electrophysiological results. If the first stimulus (face or label) was associated with self, reaction times were faster and the late frontal positivity following the first stimulus was more pronounced. The self-association of the second stimulus (label or face) did not affect response times. However, the central-parietal P3 following presentation of the second stimulus was more pronounced when the second stimulus was preceded by self-related first stimulus. These results indicate that even unfamiliar faces that are associated to self can activate a self-representation. Once the self-representation has been activated the processing of ensuing stimuli is facilitated, irrespective of whether they are associated with the self.