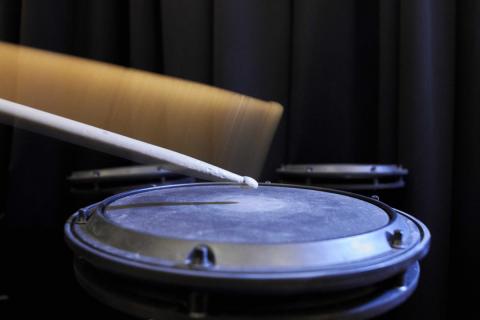 When people engage in rhythmic joint actions, from simple clapping games to elaborate joint music making, they tend to increase their tempo unconsciously. Despite the rich literature on rhythmic performance in humans, the mechanisms underlying joint rushing are still unknown. We propose that joint rushing arises from the concurrent activity of two separate mechanisms. The phase advance mechanism was first proposed in research on synchronously flashing fireflies and chorusing insects. When this mechanism is combined with a human-specific period correction mechanism, the shortened periods of individual intervals are translated into a tempo increase. In three experiments, we investigated whether joint rushing can be reliably observed in a joint synchronization-continuation drumming task. Furthermore, we asked whether perceptual similarities produced by the actions of different individuals modulate the joint rushing effect. The results showed that joint rushing is a robust phenomenon occurring in groups of different sizes. Joint rushing was more pronounced when the action effects produced by different individuals were perceptually similar, supporting the assumption that a phase advance mechanism contributed to rushing. Further control conditions ruled out the alternative hypothesis that rushing during rhythmic interactions can be explained by social facilitation or action mirroring effects.