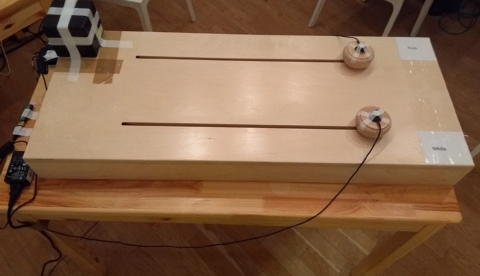 Acting in synchrony is a fundamental part of many social interactions and can have pro-social consequences. Explanations for this relationship were investigated here using implicit measures of imitation (automatic imitation task) and memory (preference overlap task). In Study 1, participants performed an intentional synchronisation task where they moved sliders in or out of time with another person while a third person observed. Those who had moved in synchrony showed a stronger tendency to imitate their partner’s actions than those who had moved in a non-synchronous way. Similarly, coordinated partners were also more likely to share object preferences. Results also showed that rather than memory blurring between co-actors, participants had improved memories for the self. Study 2 exchanged intentional for incidental coordination (coordinating with a synchronous metronome). None of the findings from Study 1 replicated when synchronisation was incidental rather than intentional, suggesting that having a shared goal may be critical for triggering effects of synchronisation on imitation tendencies and memory. Together these findings favour explanations related to changes in social categorisation over representational overlap between co-actors.