Affective compatibility with the self modulates the self-prioritisation effect 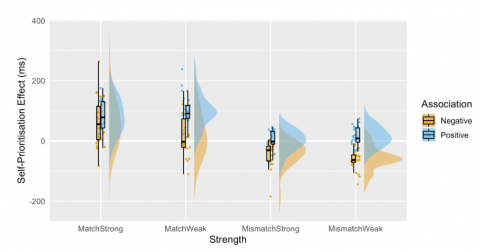 The present work asks whether affective consistency between the self and arbitrarily self-associated stimuli influences the degree to which self-prioritisation can be observed. To this end, participants were asked to associate themselves with either a positive or a negative concept and to then indicate if a given stimulus (Experiment 1: Emotional faces; Experiment 2: Luminance cues) and an identity label matched. If affective consistency is key to self-prioritisation, negative constructs should dampen self-prioritisation and positive constructs should boost self-prioritisation because the self is universally construed as positive. Indeed, the results of the two experiments indicate that participants who made the negative association had more difficulty confirming whether the stimulus and the label matched than those who made the positive association. The implications of this finding are discussed in terms of “self” theories that span various levels of information processing. The data reveal that self-referential information processing goes beyond a default elevation of priority to the self.